A woman who says she was allowed to transition to male after just two and a half hours of counselling is speaking out after she decided to ‘detransition’ to female.

Sam, 26, decided to pay for private therapy sessions when she began to question her gender identity when she was just 21, after she was told she would have to wait two and a half years for an NHS appointment.

She was initially thrilled when she was given a private appointment, and after self-diagnosing herself as a trans man after doing research online, was given the go ahead to begin hormone therapy and undergo a double mastectomy after just two hour-long appointments with a doctor.

Just two years after she began the hormone treatment and after a double mastectomy, she began suffering health complications, and realised she did not want to go ahead with full gender reassignment surgery.

By the time her initial NHS appointment came through, she began to realise she had made a mistake – and told doctors she was now seeking help transitioning back to a woman. 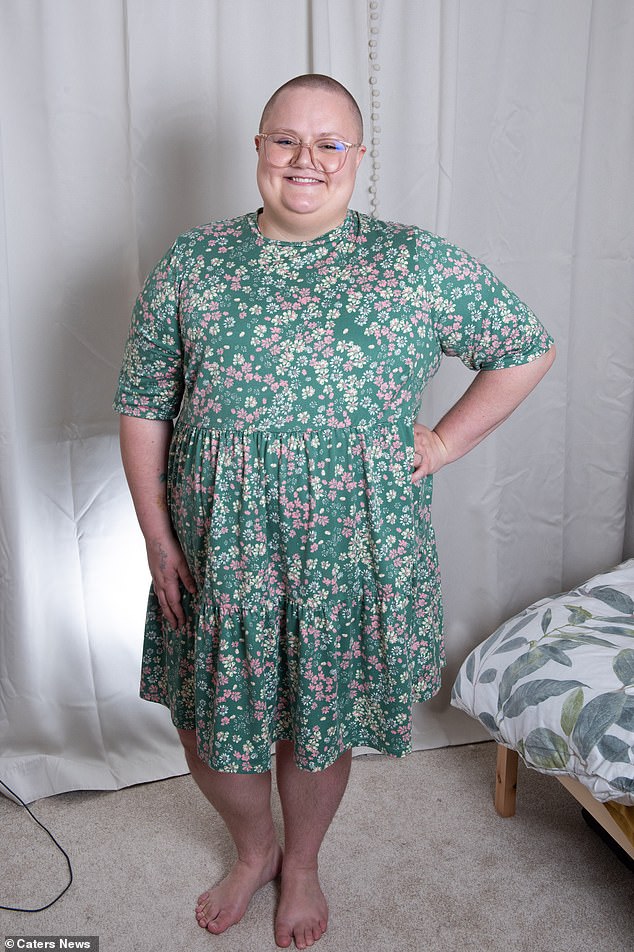 Sam, 26, from the Midlands (pictured after detransitioning) decided to pay for private therapy sessions at 21 after she was told she would have to wait two and a half years for an NHS appointment 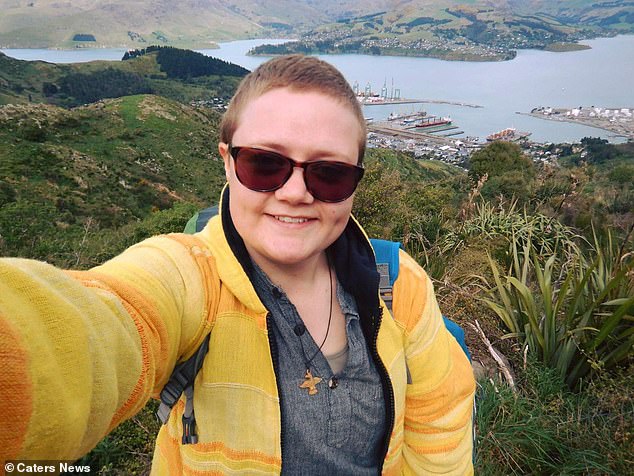 After two years taking hormones, Sam says she began to suffer vaginal atrophy and decided she did not want gender reassignment surgery. She has transitioned back to living as a woman

Sam is now speaking out in a bid to help other people struggling with gender identity – and to warn them of the dangers of going through the process too quickly without proper therapeutic support.

Sam, from the Midlands, said: ‘I am now reconnecting with my natural body in the form it is in now and my life is about moving along.

‘I have the permanent effects of my journey but they don’t invalidate me as a woman.

‘I do still feel regret towards medical steps I took during my transition but I am working on loving and accepting my body for how it is rather than how used to be and how I wish it was.

‘I do believe that therapy should be involved at all stages of the transitioning process to help spot and explore red flags that may appear in someone’s transitional journey.

‘I also think more information should be given to individuals to make sure that their informed consent is truly informed.

‘It has been a really difficult journey for me, and I have lost a lot of friends in the process who felt that I am in some way anti-trans.

‘I saw a community full of so many people who had transitioned and it had finally made them happy; and with hindsight, I looked at them and thought that would be what made me happy too.

‘I now know that I am not a trans man, but I didn’t have enough therapy to explore what was really going on with me and help me realise that I don’t have to fit into a box of one of society’s defined gender norms. 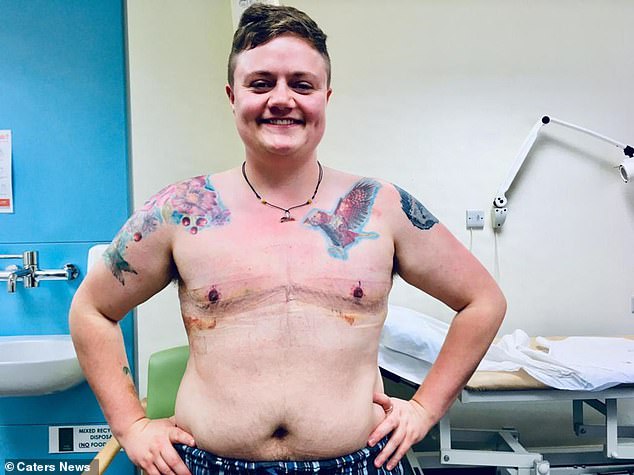 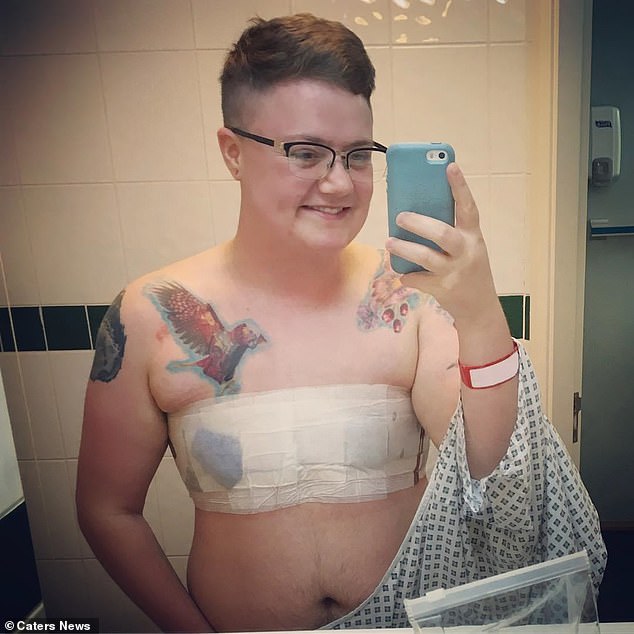 Sam had struggled with her identity during her teenage years, and shortly after she turned 21, in 2016, she discovered a community of trans people online which struck a chord with her

‘I have been through the process and regretted my decision, so I feel like I am in a good position to share a different perspective about what should be done differently to help people who are questioning their identity.

‘The industry is under huge pressure from the trans community to move things along quickly because of statistics around suicide. This frightened me into feeling I had to do everything as quickly as possible to avoid feeling that way.’

Sam had struggled with her identity during her teenage years, and shortly after she turned 21, in 2016, she discovered a community of trans people online which struck a chord with her.

‘Throughout my teenage years, I fluctuated around identities until I discovered videos online about people who were transitioning for the first time and discovering who they were,’ Sam explained.

‘I identified with it a lot as I struggled to pinpoint who I was. I wasn’t masculine and I wasn’t hugely feminine and I wanted to feel this happiness and freeness I was seeing in others.

‘So in February 2017, I decided to go to my GP, who referred me to a local NHS gender clinic, however, there was a two and a half year wait.

‘I was an adult and earning money, so I decided to save and go privately because I thought I wanted the process to happen quicker.’

Sam was given an appointment to see a specialist at a private Gender Clinic in June 2017, but decided to legally change her name in May 2017.

Sam (pictured prior to her transition) said: ‘I am now reconnecting with my natural body in the form it is in now and my life is about moving along’

‘I was really identifying as non-binary, which I told the specialist at my first appointment.

‘But between the first and second appointment, I decided that I would be treated more quickly if I identified as a man – and I would be able to get me to a point that I thought would make me happy.

‘So I continued down a path that led me to identify as male by the time I got to my second appointment because I thought it would get me the fastest care and thought it would be easier to live as a man.

‘I had decided I wanted to start taking testosterone and wanted surgery to remove sexual parts of my body, especially my breasts because they were very distressing for me.

‘I was diagnosed with gender dysphoria which meant I could apply to start taking testosterone. It was crazily fast, but there was such a sense of urgency because I was feeling distressed and I didn’t want things to get worse.’

After just two hour-long appointments at the clinic, Sam says she was prescribed cross-sex hormones, which she began taking in December 2017.

Five months later, in May 2018, she was able to undergo a double mastectomy, despite rules saying the patient must have lived as a man for a year – by citing the date of her name change as when she started living as a man – even though she did that prior to any therapy – and was put on the waiting list.

Sam said: ‘I was able to have the surgery just a year and nine months after I first discovered trans people.

‘I was so happy after the surgery because I had been binding my breasts for years. It felt like a huge relief.

‘The hormones worked really quickly and within a few months, my voice had dropped, I grew body and facial hair and even developed a micro penis.

‘My hairline also began to recede a little, and I noticed a huge change in my emotions. Whereas I’d once been a very emotional person, it felt as though the testosterone had numbed the heights of my emotions. Nothing made me feel incredible happy, and nothing made me incredibly sad any more.

‘I had moved from working in childcare to working in a very male-dominated job working with trains, and when I first met people, nobody knew I had transitioned from female.’

But just two years after her surgery, by mid-2020, Sam began to suffer from vaginal atrophy – where the female sex organ tissue begins to die off because of the lack of female hormones to keep it functioning and healthy – which left Sam in crippling pain, as well as with an increased risk of developing cancer.

She was horrified when NHS doctors told her the only treatment available to her was to have a hysterectomy – an operation which she did not feel ready for and made her realised that she never wanted to have full gender reassignment surgery.

She explained: ‘I wasn’t prepared to have a hysterectomy at the age of 24.

‘I felt distressed as didn’t feel properly informed about the side effects that came with taking testosterone.

‘I was experiencing imposter syndrome. I didn’t feel like the other men I was around, and I felt like I was constantly pretending.

‘So I started questioning why I wanted to identify as a man.

‘I didn’t want to regret my decisions but I was no longer comfortable living as a male.

‘I researched more and I discovered a group of detransitioners, so I explored the femininity that I had suppressed for all of these years and I came to accept that I was female.

‘Against the advice of my doctors, I stopped taking my hormone medication.’

She added: ‘Although I still love having a flat chest, I won’t be able to breastfeed if I ever have children and it has taken away the opportunity to learn to love my womanhood.

‘I don’t want to put my body through breast reconstruction but I know that I would’ve learnt to love my body in its entirety.

‘I have also started to menstruate again, which took around a year to come back to after I stopped taking testosterone, although I have been left with excess body hair and a deeper voice.’

‘I am talking about my experience because it is important to discuss these topics because, using their hindsight, detransitioners can help spot red flags and help others when it comes to making these important decisions.

‘My family have always been supportive of me, but I have found that quite a lot of friends have drifted away since I have detransitioned.

‘There seems to be a huge emphasis in society in supporting trans people, almost to the point that it is seen as what I did as being anti-trans.

‘When I told people I was transitioning to male, I was met with overwhelming excitement and support from my friends.

‘But when I revealed I would be reversing the process, I was met with questioning and distance from so many people I considered to be friends.

‘The people who matter to me are here for me and I am in a much better place now and looking forward to the future.’